This article is about my all-time favorite Christmas movie, “A Claymation Christmas.” 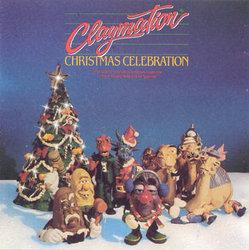 I like this movie for so many reasons. Made in 1987 by Will Vinton, I was the perfect age to be amused by the look of stop motion animation. Because the hosts were dinosaurs, I thought it was the coolest thing ever. 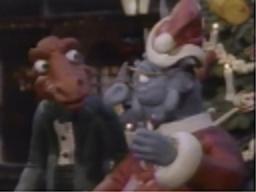 Honestly, what child of the 80’s didn’t enjoy dinosaurs? I still remember I had dinosaur sheets that matched my dinosaur curtains and ladies, I’ve only gotten cooler since then. That was the beginning of my love for this movie and since I’ve grown up and watched again I love this movie for so many more reasons that I would like to share with you.
This movie is peppered with great quotes and clever little jokes. Your two hosts are a tyrannosaurus named, Rex, and a triceratops named Herb. You gotta love the plant eater being named Herb, classic. Rex is a stuffy educated dinosaur that loves to share knowledge about the songs and pieces to be shown. Herb is more interested in Christmas goodies and the fun side of Christmas. 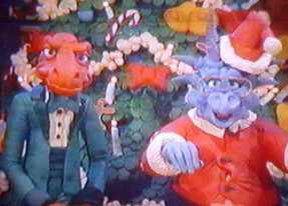 I don’t have the movie with me anymore so if I talk about a skit out of order, I apologize, but I want to walk you through this wonderful movie.
The first skit is to the song, “Angels We Have Heard On High” performed by ice skating walruses. 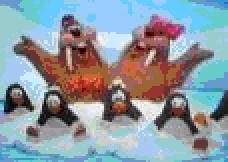 The walruses have made up Russian names like Iva Gainedalottaweightski, or something like that. You find a lonely male walrus skating alone depressed. Until he spots a female walrus and they start skating together. 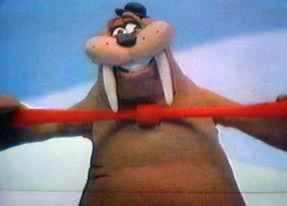 The female seems sweet but enjoys toying with the boy walrus and throwing him all around the ice. This skit is hilarious because there are also penguins on the ice and they are the ones that get truly beat around. Just as they get back on their feet, they get pounded by the one ton skating duo. This skit is cute and I can still picture the penguin’s faces as they get flattened and it makes me laugh out loud. 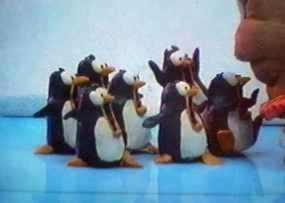 After each skit you go back to your hosts and thus starts the beginning of the running gag. Rex is explaining about the next song and out comes a group of dogs singing “Here we come a WAFFALING” down the street. Rex corrects them and says the words are actually “WASSAILING.” The dogs ask what that means and Rex is stumped and embarrassed. As he looks to his co-host for support, we find Herb ordering waffles and stuffing his face. Perturbed, Rex introduces the next song.
“We Three Kings” shows the Wiseman following the North Star and nearing Bethlehem. The first king starts singing and when he gets to the chorus, he is interrupted by the camels (one is wearing a fez, awesome) that sing in a jazzy way. 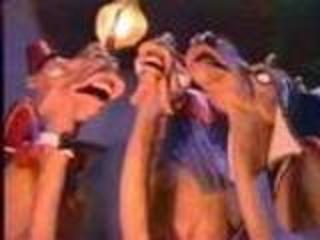 After they finish they look at the kings with a superior look as if to say, “You may be Wiseman, but we totally just served you singing style.” You may have to read a little between the lines when watching the movie to see that. This continues for each verse and the skit ends with the Wiseman at the Lord Jesus’s feet.
We come back to Rex and Herb and for once Herb puts down his food and explains about the next song. We learn that pagans used to ring bells during winter times to ward off evil spirits and thus was born, “Carol Of The Bells.” Whenever Rex talks now there is constant ringing in his face and Herb asks, “Why aren’t you warding off?”
This is my favorite skit! Each bell is a living being in a choir conducted by Maestro Quasimodo. 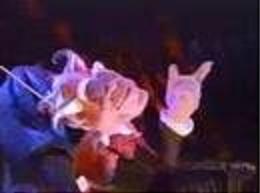 The announcer says, “I have a hunch we’re in for a treat tonight.” Classic. Each bell has a mallet and smacks himself in the head to perform this song. One bell is the “Dopey” of the group and friggen hilarious. He is the final note and every time it’s his turn, he is doing something else. From air guitaring with his mallet, to throwing his mallet away after he smushed a fly with it. Again, the facial expressions are priceless and I laugh well after this skit has finished.
As we come back to the dinosaurs, there is now a group of geese approaching them singing, “Here we come a WADDILING” with baskets full of eggs. 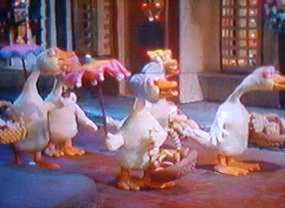 Rex tries to correct again and Herb rushes to get his share of candied eggs.
The next skit is more heart warming than funny. “O Christmas Tree” starts to play softly as we slowly pan in from a wide view of a house through the window to see two children decorating a tree. 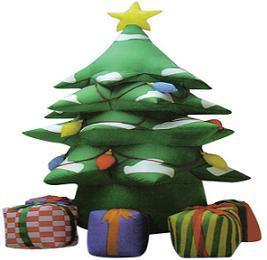 It is a brother and sister, the sister being older and is handing ornaments to her younger brother. I love this because it is just like my family. Except replace children lovingly sharing decorating together with two kids drawing blood from each other because we each want to be the one to throw the golden tinsel ball. This problem was later solved by the purchase of a silver tinsel ball and ring. You either got the one gold, or two silver. Anywho, as time and self delusion work their magic I picture myself as that cute boy sharing the decorating with his sister. On the tree is an ornament of a ginger bread house and we again pan in through the window to see happy goodies dancing around their own tree. 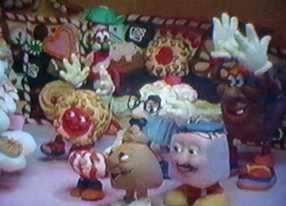 Pan in again, and we come to the elves workshop. Each elf happily working away to finish the last toys before Christmas. 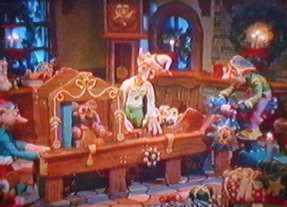 Pan in again and we are in Mr. and Mrs. Claus house. Mrs. Claus is peacefully knitting in her rocking chair and Santa is asleep in his near the fire. 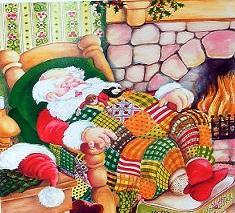 We pan in one more time and arrive back at the children’s home with a tree fully decorated and the kids staring in awe. This whole skit gives a feeling of love is a perfect setup for the next song.
Rex is explaining that the writer of this song was trying to express his emotion in a single word. He is again interrupted, this time by pigs in a trailer full of fruit singing “Here we come a WALLOWING.” 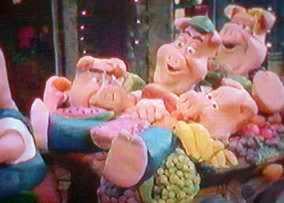 Rex regains composure and is about to share the word with us when Herb jumps into the fruit pit and shouts, JOY! 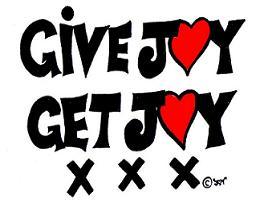 “Joy To The World” is a treat for the eyes. It’s an explosion of colors and melding of one form to another. 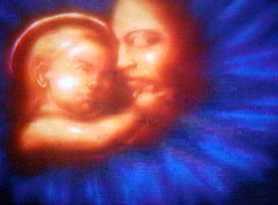 It is hard for me to describe, but the movie shows what it can to express the words from the song and ends with all out craziness.
The final song is “Rudolf The Red-Nosed Reindeer.” But it’s not sung by just anybody, it’s none other than The California Raisins. 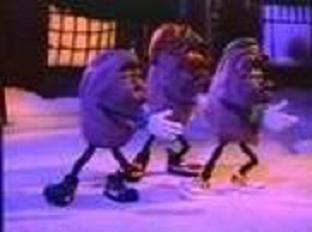 We seem them leaving a building after finishing their last set but have missed the bus. How do they get home? By taking random garbage from the street and making a hobo sleigh and reindeer, that’s how. One of the raisin’s noses gets turned on to glow a bright red. 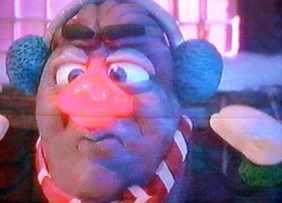 Just like in the song he is embarrassed and tries to hide. But once Santa needs him, everyone gathers around and loves him. This song is sung a little different than the traditional way and is very pleasing to the ear. Not to mention that if you don’t like the California Raisins, you’re most likely a communist nazi.
With all the performances done, everyone has gathered with the dinosaurs to sing together. 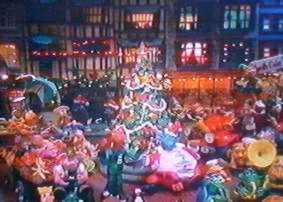 Rex is still down that nobody has sung the song right until a truck of people drinking (I’m pretty sure it’s beer) comes to a screeching halt in the middle of the party. I thought they were elves, but the description of the movies claims they are townspeople. Except now I think they are hammered leprechauns. 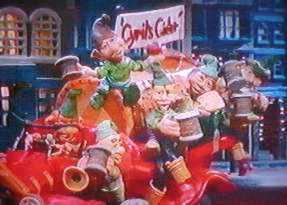 They do have an Irish accent so I may be right on this. Not only are they singing the correct lyrics they also explain that to wassail means to enjoy Christmas goodies and share the Christmas spirit. With a feeling of closure Rex triumphantly turns to the screen to say goodbye with his co-host, but Herb is nowhere to be found. We at last see him in the middle completely bloated from all the goodies. 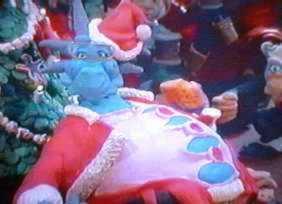 Rex instructs Herb to say goodnight and the movie ends with Herb saying, “Goodnight Herb.” Classic.
I looked and you can still by this movie, normally on a DVD with some other claymation movies. But that’s not how I acquired it. When I was a sophomore in high school I was talking about this movie and a girl in my math class over heard me and offered to give me the movie as a gift. Turns out, she had taped this movie from HBO and it even had the beginning of HBO intros. You know, were it’s a close up of red, green, and blue lights. Then they all sorta turn to purple and it backs away until you see the letters HBO. You know what I’m talking about. So I have this movie on tape with a bunch of other Christmas movies, my second favorite one being Garfield’s Christmas. If you have not seen that one, I recommend. But certainly without a doubt watch “A Claymation Christmas.” 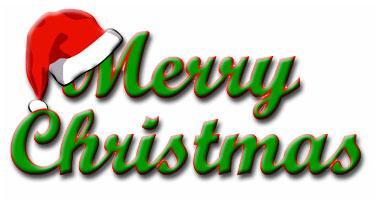